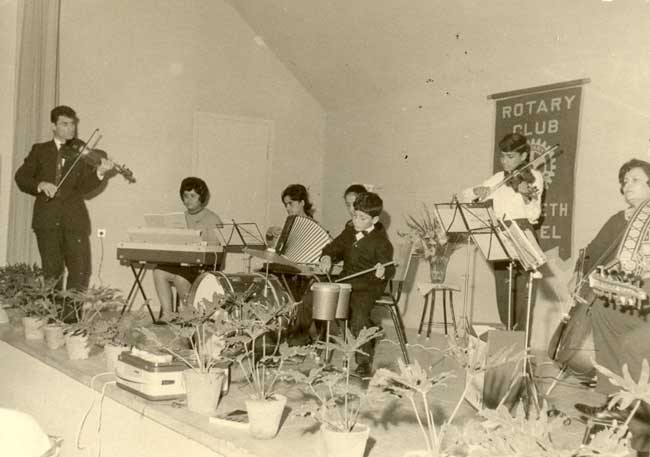 In 1964/65 during the presidency of James Smith RI President Charles Pettingel and his wife Madeline visited Israel and a District Inter Club meeting was held at the new cultural center in Nazareth. The meeting was attended by about hundred members from all the District together with the Mayor of Nazareth Mr. Sef el Din Zobi and other notables from the town.

Christmas Party this year took place in the new Cultural

Salim Azzam Band Group playing during the Inter club meeting
Center R/Khalil Abboud proposed the Ladies Toast – R/Ann shammas responded and Yusef Srouji gave the International Toast.
A Choir from Petah Tiqva gave a short concert.
A Braille dictionary was donated to Miss Awad and J.W,S. Towards the end of the evening, there was folk dance music where members and their friends danced till the early hours of the morning.

In March 1965 president Smith accompanied by PP. Yousef Srouji and Rotarians Emile Nuseir, Moshe Rahamin and Ernest Farah traveled to Sde Boker in the South to attend a special Rotary Inter Club Meeting. The guest speaker was MR. David Ben Gurion who asked the Rotarians of Israel to help in absorbing the new Jewish immigrants in the country.