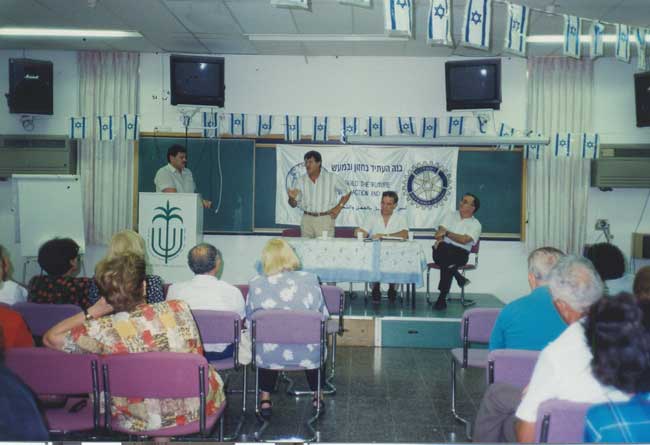 On the 20th and 21st of September a conference on Arab Jewish friendship was held in Bet Berl (nr. Kfar Saba). Members of the Governors Board Zeidan Atshe and Yacob Frucht conducted the discussions for the betterment of Arab Jewish relations between the members and in the country at large. In the morning session the members attending discussed the finding of ways to get grants from the government institutions and others so as to strengthen the projects of the clubs.
In the evening a social party was held to let members from different clubs know and befriend each other so as to facilitate working together.
Towards the end of the evening Muli Cohen showed some of his magic tricks that interested the audience.
On the second day, problems of the clubs in the Arab sector like Tarshiha were discussed and some suggestions were given to correct the disappearance of these clubs.
1) The sponsor club should remain in touch with the new club and follow his activities and find his weaknesses.
2) Unite clubs in near by areas.
3) Increase interclub meetings inviting the weak clubs to learn and get encouragement.
At the end of the day Governor Victor Ben Naim and Governor Elect
Grizim thanked the members for attending the conference.
Governor Victor in his final address announced that he was adding Yusef Srouji to his team responsible for the projects concerning Fight Against Road Accidents.