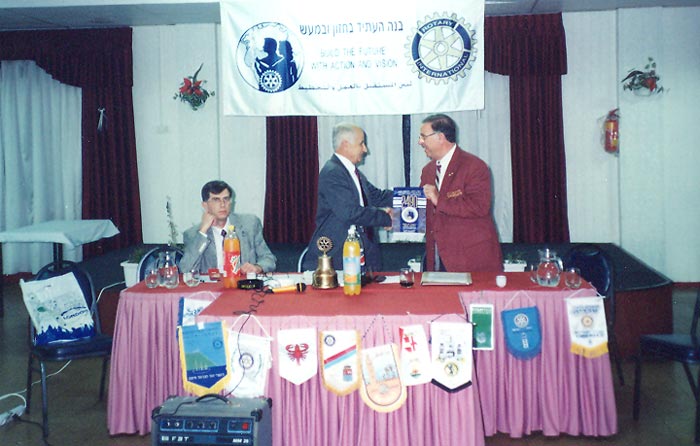 On Tuesday the 26th of November 1996 Governor Victor Ben Naim paid his official visit to the club of Nazareth. At 6.- President Khalil Abboud and some of the past presidents accompanied the governor to the Municipality where they were met by the Acting Mayor Dakheel Hamed . Discussion centered around the preparations for the year 2000. The Governor promised to help in a certain project that all the clubs would join in.
At eight in the evening the official meeting of the Governor`s Reception started by President Abboud welcoming the Governor and all the guests
including the president of Migdal Hemek club and the members of the Rotary Club of Nazareth, and their wives and friends.
Yusef Srouji gave rotary information about clubs in Turkey,India and the Philippines.
Nader Agha proposed a toast to the club of Zamalek Internaional in Cairo.
The Governor gave a short talk praising the active club of Nazareth for all the work it is doing for the benefit of the members and the community.
He advised that the club should do more reciprocal visits with other clubs in the District for the benefit of all.
He promised to request from the International President to share in the activities of the year 2000
The Governor reminded the members about the Arbitration Project and mentioned that there will be a special award for the club that settles the highest number of Arbitration Cases.
The Governor finished with thanking the President and the members of the club of Nazareth followed by exchange of presents between the Governor and the president