Past Presidents Dr. Awni Elias 2015 - 2016 CHANGE OF PRESIDENTS IN THE ROTARY CLUB OF NAZARETH 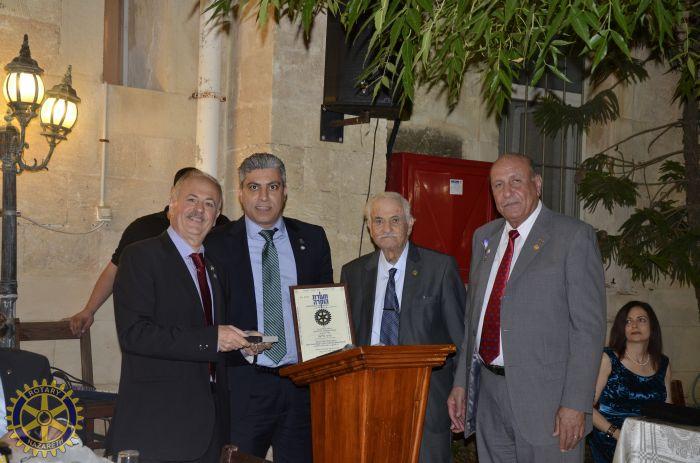 On Tuesday the 5th Of July 2016 Rotary Club of Nazareth held its yearly meeting for the change of Presidents from Dr. Awni Elias to Mr. Bashir Bishara in the presence of IPDG Emile Al Asmar and PDG Yusf srouji and President of the Innerwheel club and members of Rotary and Innerwheel Nazareth.

President Awni announced the beginning of his last 40th meeting by welcoming all Rotarian and Innerwheel members and guests then asked the Innerwheel to start the exchange of Presidenc y from Mrs. Nahida Jarroush to P.President Sylvia Saba.

In his last message Dr. Awni spoke about the activities of the club during the last year mentioning the various projects done in the club service like the several trips together and the many talks and lectures given not forgetting the traditional Christmas and the New Year Party and Diary. In the field of Community service talked about projects that intended to support the human being and his abilities specially with the projects of the scholarships that were donated to Nazareth “ Distinction Students” in the Universities of Haifa, Jerusalem and the Technion amounting to 80 thousand Shekels.

Other projects included the “Bridging” misunderstandings between students in schools with the aim of diminishing violence among young students, encouraging discussion between them and promoting acceptance of the other.

Also during this last year the Global Grant with Paris for the benefit of the French hospital Operating Room was paid amounting to 78 thousand dollars. Other donations were given to “Basma Institution” to the local Children Festival, to the Society for the “Safeway to Get Medical Treatment” that help sick children pass easily and quickly through military check points to hospitals in the country. This beside donating to the Innerwheel project of the downcentrum children and the society of Naseejuna that is trying to revive the old Nazareth needle art work. Also supporting the society “Women Against Violence” to help them buy music instruments for their project of treating children with music.

Dr. Awni before ending his message called on Judge Rami Nasser to come up to the podium receive from PDG Emile Al Asmar his Rotary Pin as he has joined the club and from tonight he is a member of the Rotary Club of Nazareth. Finally Awni thanked his committee,the members, all companies and individuals who with their support enabled the club to execute all the above mentioned projects.
Dr Awni rang the bell announcing the end of his last meeting then called on the new President Bashir Bihsara and PDGs Asmar and Srouji who helped in the formalities of the change of Presidents.

In his turn the new president rang the bell announcing the start of the new rotary year, called his secretary Suhail Issawi and treasurer Ihab Shamshoum and as such started the first meeting of the new year.

President Bashir thanked Dr. Awni and his various directors for having given the club a year full of activities and projects, With the help of the past district governors, he bestowed on Dr. Awni as Past President the Paul Haris Medal and then the Certificate of adding his name in the Golden Book of Rotary Israel.
The last speaker of the evening was PDG Emile Asmar who thanked past President Awni for all what he had done to promote Rotary in Nazareth and congratulated the new President Bashir hoping that he will continue the tradition of the club of Nazareth in working for the benefit of the members and the community.
Then PDG Emile gave a short summary of his activities as Governor of Rotary Israel during the last year after which a rich dinner was served to all present. 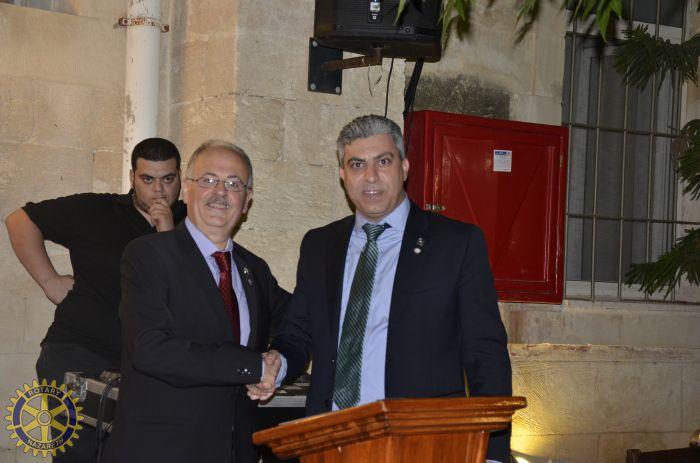 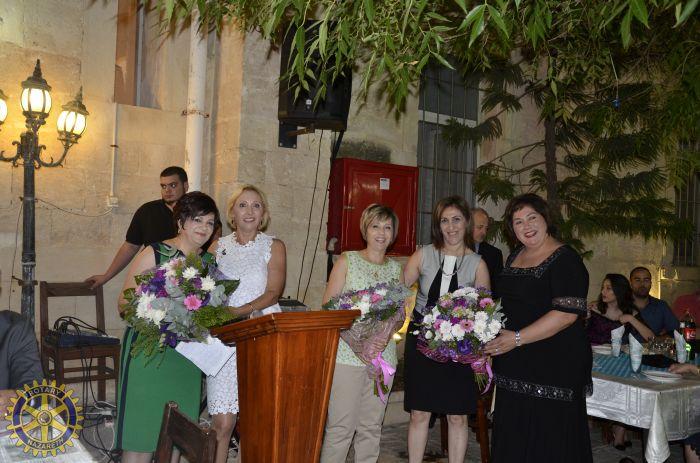 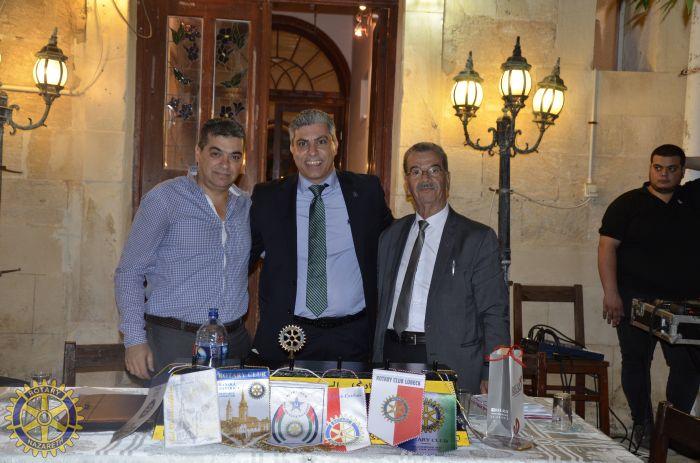 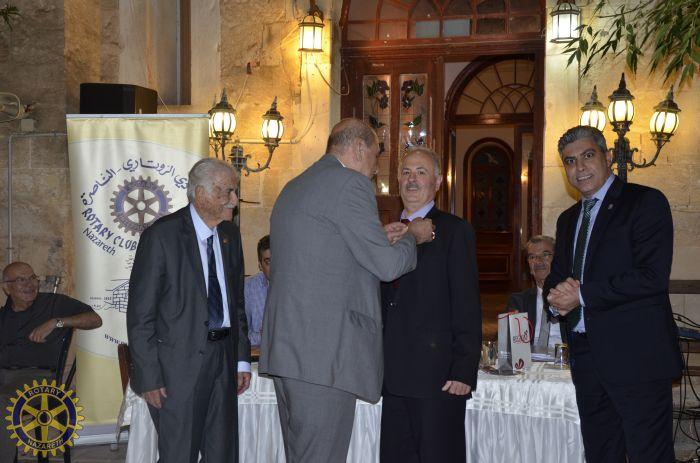 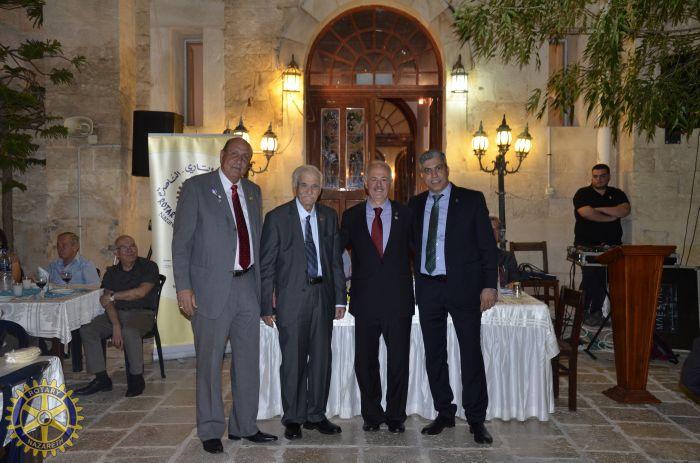 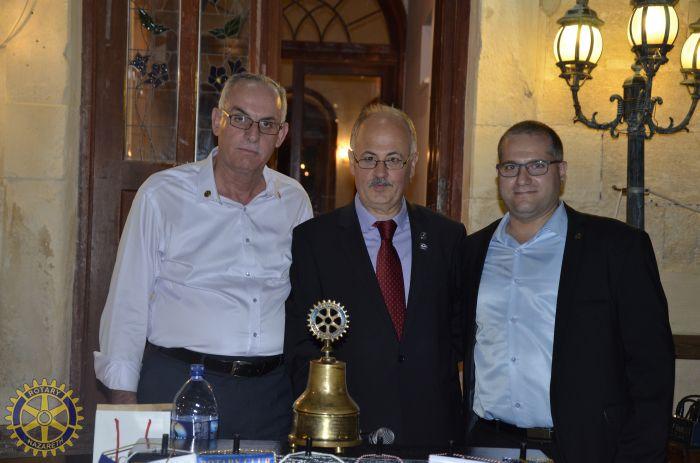 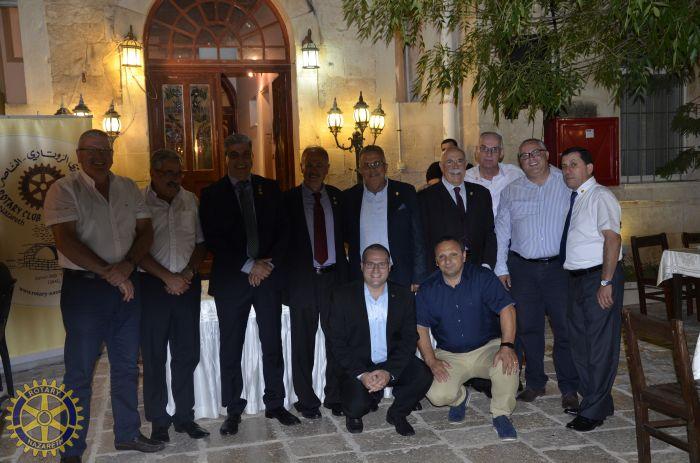 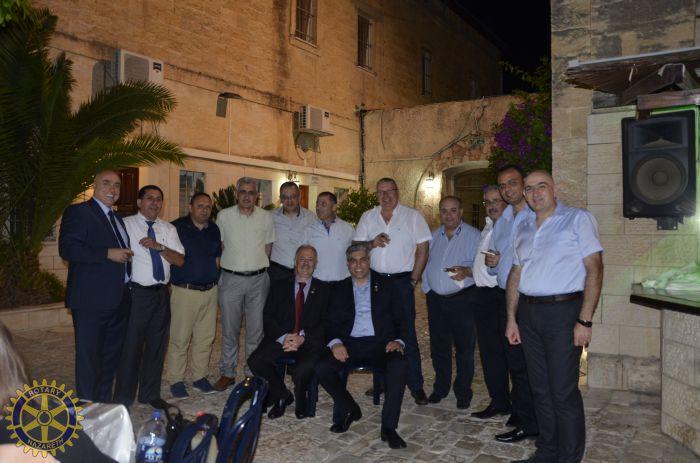